It's just a toy 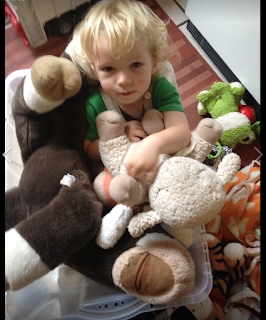 I heard the words issuing from my friend’s mouth towards his child and cringed.  Just a toy.  Wow. These words would reveal a lot to me: about him and about myself.

For a kid, a toy isn’t “just a toy.”  Toys are such a critical part of their world. They come alive at any moment.  They entertain, teach, get hands to move, enact crazy kid-logical stories, teach kids about to not only be in this world, but to create their own worlds.

There are many ways to disconnect from a child; this is one of them. Belittle their toys. So many times I have been in the middle of the store with my child.  He’s the one loudly asking if I’ll buy him a toy.  What about this one?  Or that one?  He’s the one who has burst into tears when I’ve said no. And I’ve been the one to sit with him in the middle of the store and really check out the toy he likes.  And you know what?  Transformers are really eff-ing cool.  So are mashables.  So are legos.  So are any number of toys out there.  And yeah, there are some lame ones, but by and large, when I sink into the fact that my son is intrigued by something and try to get why he’s intrigued, then I get it.  We connect.  We talk about how cool the toy is.  Sometimes we take pictures.  My smartphone has numerous photos of Pokemon cards, sticky jellyfish, legos, etc.  At the end of the day, I take my son very seriously.  He gets that I heard him, and then I set the boundary, which is almost always a no to buying random toys.

The thing is, I firmly believe that when he gets that I get him, and I get how much toys mean to him, then he’s able to actually let go of the toy when I say no to it.

Finding Connection and Empathy in Times of Stress

And herein lies the piece about my friend, which is really not about him at all. It’s about me.  It’s about how I judge parents when they don’t do things the right way.  Good grief I try not to, but I am unremarkably human in this respect.  My friend said, It’s just a toy, and a whole wave of judgment swept through my brain. How does he not get how important toys are?  I mean, he’s a great father, but to not get that??!! And then I saw myself.  I saw how I try to get my son out the door, and sometimes it’s like herding cats on LSD.   At my best, I create games at the drop of a hat, enacting dinotrux in peril, competitive races, imagining being pelted with slime balls - anything to tickle his imagination and get him out the door.

At my worst, I am impatient, pressuring, short-tempered. My worst is a bitten-through-teeth countdown while  I contemplate throwing him over my shoulder like a sack of potatoes.  My worst feels tightly corseted in time constraints.  My worst is saying things like, It’s just a toy. Sigh.

And therein lies the compassion and empathy - not only for my child, but for parents, for myself, for all of us who are just trying to do our best, and sometimes - just sometimes - our best is unimpressive. These are the moments when I back up. Breathe. Apologize if I need to. Repair if I can. And remember that that kid is just trying to figure out how to live in in this world - and sometimes as parents, so are we. 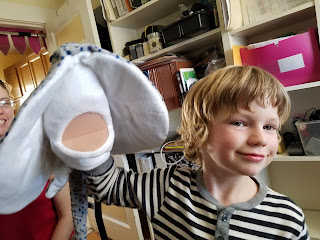