Lessons from the Sloths 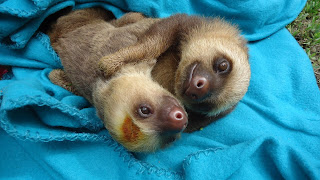 I woke up this morning and had the feeling I often have: of endless repetition.  It’s been a long drudging haul to get to the end of this internship I'm doing, and still it’s not over.  I feel the way my son sometimes feels: that it’s going to go on forever and really. Never. Stop. It’s been a long semester, and now that’s over.  It’s been a long year and a half doing my paralegal internship and now 11 weeks of an internship, and it’s almost over, but not quite there.

The other night, T suggested that we could be slothful, and that sounded like one of the most blissful things I had heard in quite some time.  What would that even look like?

We started on the couch.  The couch is definitely a place where one can be slothful.  About the only place that tops that is the bed.  A hot tub is probably a good tie.  But we weren’t in bed (it would have required us actually moving our bodies to get there), and a hot tub was nowhere in sight, so the couch it was.

T’s couch is covered in velvety micro-fabric.  This is really key.  There’s really no way to be slothful on a couch that doesn’t invite you to melt into it and luxuriate in the fabric which entices you to stay there forever.  If you’re stoned, any couch might do, but we were sober, so the fabric and cushiness of the couch was key.

We sank into the couch, cups of hot tea in hand - and here’s another salient point: the beverage.  Now, we had declared our slothful intentions after getting tea, which is critical.  Getting up to acquire a drink after declaring such an intention would have been anathema to the whole idea.  Fortuitously, we had hot drinks in hand, which meant we could indulge more in the sludginess of our limbs.

The conversation was sparse, as it should have been.  I mean, have you ever seen sloths yammering away?  Right?  No. T was curled into my side.  We had intended on having a big social media marketing conversation, but that was clearly sidelined.  Even muttering the words, I thought we were going to work, sort of trailed out of my mouth in slow-motion.  T muttered, Maybe later, and that was fine by me.  The critical words in that moment were, Do you want to watch something? And we did.

Carnivale might not seem like the optimal choice for two laggards, but it actually worked out. We didn’t have to pay for it (Go Amazon Prime!), it was easy to find, his TV was set up (big screen, baby!), and the sequences are so bizarre and dreamy, that it actually fit in quite well. Furthermore, the first episode has little to no plot, which meant we could feast on the lush imagery and freakish characters quite indulgently.

The lurid imagery washed over both of us as we huddled together on the nesty sofa, exchanging lackadaisical comments about the actors (total sloth talk).  And before I knew it, the minutes had slipped down the hourglass, and it was time to move on.

We chatted options, words languidly drifting from our mouths. From time to time, I had prickles of inspiration and movement, but when I relaxed into it, it really just felt better snuggle up on the couch.  Just for another minute. And maybe one more.  After all, isn’t that what sloths would have done?
at June 05, 2017