Mama, What the hell is wrong with you? 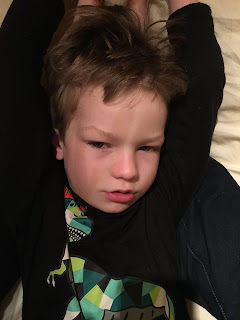 Mama, What the hell is wrong with you?

I was sideswiped by my five year old’s words.  Stunned.  Hurt.  Where had he learned that?  I had never said that to him.  I knew his father had never said that to him.  I scoured my brain.  My parents: no.  His teachers: no.
I turned away from him.  I was juggling making dinner with his needs, and right now, nobody was winning out.  I couldn’t get far enough making dinner without interruptions, and every need of his was so significant, it “couldn’t wait.”  Now, here we were.
I was alternately sad and enraged, but more than that, I froze in that place of hurt.
“Talk to your father,” I said.  “I can’t help you now.”  While I believe in regulating my own emotions before engaging in sticky situations with my child, at that moment, I was so contracted, I didn’t know where to begin.  In that place, shoving him off on the other parent seemed wise.
Philippe joined us in the kitchen.  Everything about me screamed contraction.  My stomach, throat, voice, all felt tight and mean.  I started to cry.
“I can’t believe you said that to me,” I said.  Phoenix stared, transfixed.  It certainly wasn’t the first time he had seen me cry, but it was a rare moment when it was because of his words and actions.  He began to cry as well.  Philippe sat with both of us.  Part of me wanted to torch him with flames, but the other part just felt deeply sad.
Phoenix wept, and I held him close. Even in those moments, I can usually find that place in me that wants to hold my sweet boy close.  I didn’t want to push him away; I wanted connection.
“Mama’s hurt,” Philippe said.  And then a small space opened within that tight bad of hurt.
“Where did you hear that,” I said.  “Who said, ‘what the hell is wrong with you’?”
Phoenix answered right away, “A--- said it.”
“When did he say it?”
“He pushed me down the stairs, and when I started to cry, he said, ‘What the hell is wrong with you?’”  I felt myself breathe again.   I didn’t realize I had been holding my breath, but I had.
“How did that make you feel?”
“Bad.”
I nodded with him.  Suddenly it all made sense.  He had felt powerless.  He was testing the words out to see if they had impact.  They had.
“When you said it to me, I felt really bad, too.  Awful.  Kind of how you felt when A--- said it to you.”  He nodded.
“Words are powerful,” I said.  “Even when a kid says them.  They hurt.”
I held him close.
“Your words are powerful.  Just remember that.  They can hurt an adult.  They hurt me.”
We breathed in together. In and out.  Within my body, I felt more opening.   I felt connection, which is what Phoenix had really wanted – and I had wanted, too. If A--- had said this to Phoenix, then who had said it to A----. Maybe another kid.  Maybe his parents.  He probably felt the way Phoenix had felt.  The way I had felt. I didn’t have the power to stop that, but I did have the power to stop it in our family and teach Phoenix how even a five year old has the power to wound and to heal.